‘Brain Drain’ is the term we usually use when professionals like engineers, doctors,  scientists or highly skilled professionals depart and leave the country permanently. 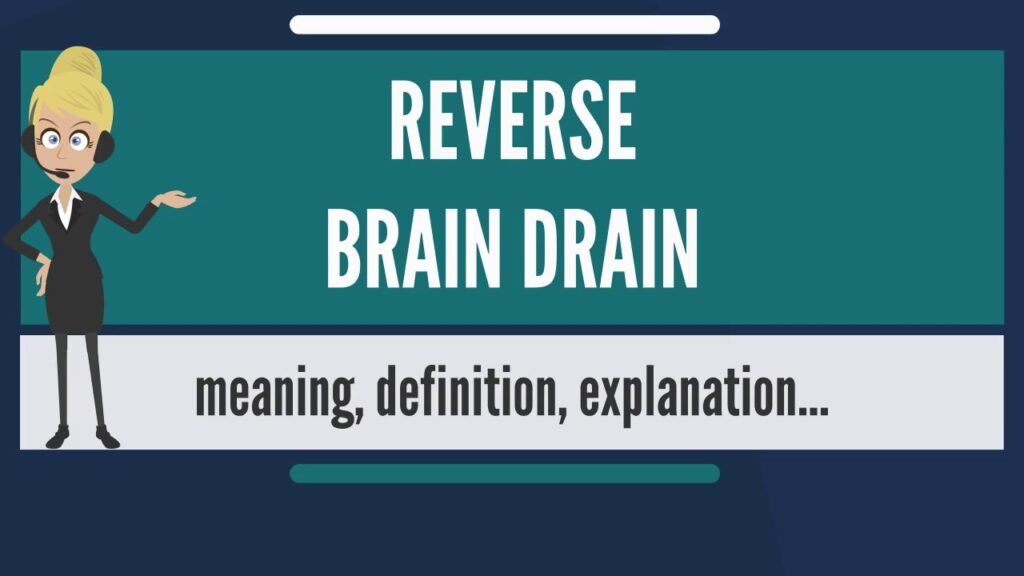 When these people leave, the country’s economy is harmed as each professional represents surplus spending units. Professionals often earn large salaries, so their departure removes significant consumer spending from the country.

“Reverse Brain Drain” is a form of Brain Drain where moving of highly skilled professionals is in reverse direction. i.e. from a developed country to developing country.  These migrants develop skills overseas that can be used in their home country.

These professionals then return to their home country after several years of experience to start a related business, teach in a university, or work for a multi-national in their home country.Their return is thus called  “Reverse Brain Drain”.

“Reverse Brain Drain”  depends on  country’s development and also strategies and planning over a long period of time.

Strategies can be in terms of developing migration policies to attract foreign academics and professionals and skilled personnel back to home country.

Countries that are looking forward to bring in back the intelligentsia develop an environment and provide rewarding opportunities for  those who have attained the knowledge and skills from overseas.

In a recent study published by the Harvard Law School, 50 per cent of NRIs are returning  for business start up reasons and applying their entrepreneurship skills that they have learnt abroad.

Some key findings of the same study  are:

NRIs in the recent past  have returned to India in a massive scale ever since the US recession began.

Some of the prominent reasons are listed below:

After  leveraging the education and experiences they gained abroad, they would like to apply  their skills and contribute towards the growth of India’s economy in numerous ways, across all sectors and walks of life. Whether it  may be starting their own businesses ,  non-profits, high-level positions at MNCs, or purely to be in a country that they can confidently call “home”.

Another very prominent  reason as to why NRIs are returning to India is because they are unable to get their spouses, parents, and relatives visas abroad. Since India does all welcome  NRI’s  warmly as they are most likely to contribute  towards the economy in a meaningful way, reverse brain drain is something that is taking place.

Another valid reason as to why NRIs are returning to India is that they are unable to start up their own business  abroad  due to recent changes in immigration rule  laws forbid students to work on outside jobs.They can  work as an employee (within their domain of studies) or  can do internships with companies , but they are not allowed to be  an entrepreneur.

Among those NRIs that are returning to India, specially scientists in a massive number are returning back to home country due to  better research opportunities  that can be availed in India.  Love,  patriotism and passion to do something for the home country are the other reasons.   Due to the handful of programs that are launched by Indian Government  to lure NRIs  back to home country which includes the setting up of  The Ramanujam Fellowship Innovation in Science Pursuit for Inspired Research (INSPIRE) Programme and the Ramalingaswamy Fellowship programme , majority of  “reverse brain drain” has happened not only  from the U.S. but also from  Germany, Britain, South Korea and Japan.  Around 500 scientists have come back in the last seven years – and only six have gone back.

The tide has finally passed of ‘Brain Drain’ when two decades ago in the 1990’s many of the IT students left their home country to abroad for better education and employment opportunities. Skilled Indian students were leaving the country and caused India  to worry that they would not return.

However, in the  recent past,  India’s economy has taken a boom   while the US and other countries have  seen the downfall. The urge to come back to India from west has started growing and will only grow since returnees know that home country will provide equal opportunities to grow, more job security as well as the intangible benefits of better family and cultural ties.