Why study in Germany?

Germany is a country in Western Europe with a landscape of woods, rivers, mountain ranges, and beaches on the North Sea. Its history spans over two millennia. The Brandenburg Gate, as well as several WWII-related structures, may be found in Berlin, the country’s capital. Oktoberfest and beer halls, such as the 16th-century Hofbräuhaus, are well-known in Munich. The European Central Bank is located in Frankfurt, which is known for its skyscrapers. 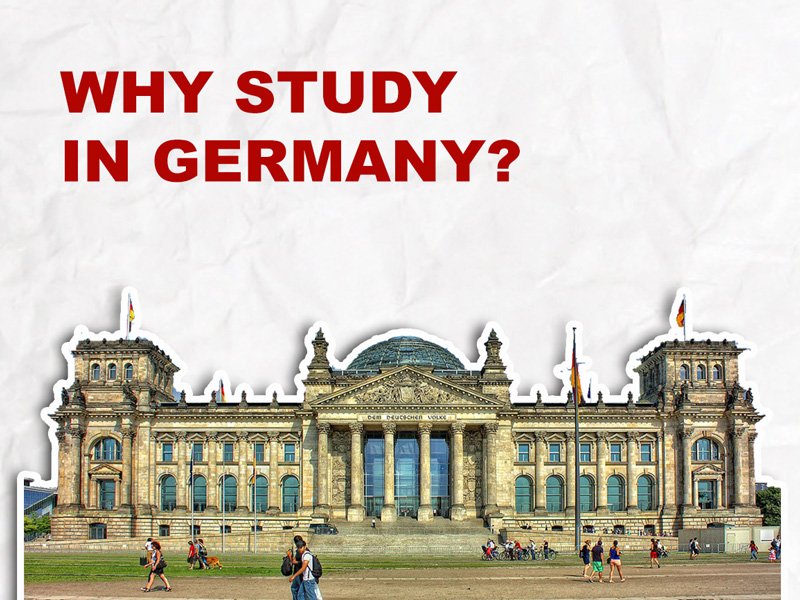 The Federal Republic of Germany has a distinct national character, and as a result, it has produced some of history’s most identifiable intellectual and artistic geniuses. German inventors invented many of the world’s most important and widely used inventions, including the machine, the automobile, MP3 players, and painkillers.

If you think of Germany as plain and uninteresting, wait and see how it might surprise you with its charm and coziness, which is admired around the world.

Aside from its creative past, Germany is home to several populous cities with progressive cultures, such as Berlin, Munich, Frankfurt, Hamburg, Cologne, Dresden, Leipzig, Heidelberg, and so on. Germany’s cities are the epicenters of the country’s diverse culture.
Berlin, Germany’s capital, is a multicultural city noted for its arts, culture, gastronomy, and nightlife.

Munich, one of Germany’s most attractive and green cities, boasts world-class museums as well as classic German architecture. Every year, more than 6 million people visit the Oktoberfest, which is known for its world-famous beer.

Beautiful Bavaria, one of Germany’s oldest states, boasts one of the most spectacular landscapes. Bavaria features a unique three-tiered education system, in which students can attend general education, vocational education, or adult education schools. Bavaria has a high rate of employment and is one of the best educational systems in the country. Skiing is a popular pastime in the German Alps, and Germany’s highest peak, the Zugspitze, is located in southern Bavaria.

Cologne, Germany’s oldest city, is famed for its arts, superb museums, and the country’s largest carnival events. Cologne is well-known for having the world’s third-tallest cathedral. It took 600 years to complete, and even when Cologne was destroyed during World War II, this structure stayed motionless.

An autobahn is Germany’s federally controlled motorway system, which allows German drivers or anybody else to enjoy high-speed driving. It is Germany’s nationally coordinated highway system. It is officially known as the “Bundesautobahn,” which means “federal highway.”

The German name “Autobahn” refers to the high-speed roadways created in Germany in the 1920s, which had multiple lanes of traffic moving in each direction and are separated by a Central Barrier. The world’s “Autobahn” high-speed roads were primarily built to allow people to move more swiftly from one location to another, and they are distinguished by the absence of speed limits save at junctions and danger points.

Despite the lack of a federally mandated blanket speed restriction, speed limits are still posted and enforced in urbanized, substandard, accident-prone, or construction zones, as well as in severe weather. On unrestricted portions, a speed limit of 130 kilometers per hour is recommended.

Germany has several distinctive benefits as a study abroad destination.

Germany ranked first in the European Industrial Index, is Europe’s most progressive country. One of the reasons for Germany’s successful economy is the high quality of its higher education system. As a result, many German universities place a strong emphasis on research and deliver world-class research-based education. It is known for its high-quality goods and engineering excellence. In terms of engineering, Germany is among the greatest in the world today. In order to recruit the brightest potential, the government has just opened its doors to overseas students. As a result, the country has begun to prepare for the future. In addition to German, programs are now available in English. The ability to communicate in German is not required, however, it is recommended.
Some of the popular master’s courses available are

Why Study in Germany?

Germany is a great destination for international students and offers:

With one of the world’s oldest and greatest education systems, a degree from a German university is recognized worldwide, and it attracts students from all over the world, including the United States, due to the universities’ free education and top-notch research.
Germany is the world’s third-largest economy, located in the heart of Europe.

German universities provide 15000+ programs at 400+ universities, with engineering, medicine, management, economics, and science being the most popular.

Some German universities charge very cheap tuition fees or none at all.

In Germany, students can work part-time. The maximum weekly time limit is 20 hours. After finishing the program, you can also apply for paid internships with leading firms.

Students are allowed to stay in the country for 18 months after completing their master’s degree to look for work. After completing internships, they may be eligible for work permits.

Germany is one of the world’s G8 countries, located in the heart of Europe and bordering nine other countries. Austria, Belgium, Denmark, Finland, France, Greece, Holland, and others are among the Schengen nations that accept German visas. The Schengen visa permits you to travel freely within the European Union’s 27 countries.

German universities have developed a strong network with universities throughout the world. The quality and diversity of courses offered by German higher education institutions are well known. Thousands of students get the option to study and live in a foreign nation every year. International students should be treated the same manner. As a result, German universities and technical institutes strive to provide sufficient resources.

International students are accommodated in universities, and they are assisted in a variety of ways during their time abroad.
Germany enjoys a sterling reputation around the world.

In the sphere of research and innovation, Germany has made enormous strides. In the fields of science and health, Germany has a long record of Nobel Laureates.

German universities and research institutes are well-equipped, with all of the required facilities.

The German government is one of the world’s largest research and development investors. It promotes and funds a diverse range of institutions and research facilities.

Students not only receive extensive academic guidance but are also treated as potential researchers and scientists.

The excellence of German higher education is well acknowledged around the world. In Germany, there are about 380 nationally authorized institutions spread throughout more than 170 cities and municipalities. With over 15,000 degree programs, 1,000 of which are internationally oriented, these universities provide a diverse range of study and research options.

In Germany, science and research have a long history and continue to play an important role today. Heidelberg, Germany’s oldest university, was founded in 1386.

The German government oversees and accredits universities to ensure that students receive a high-quality education.
The Bachelors’s and Masters’s systems have been embraced by universities. This provides students with greater clarity in terms of subject comparability between universities, at both the bachelor’s and master’s levels.

Private business schools have been formed to give students a strong career focus.
Innovative institutions have created campuses that offer high-quality English-language programs. As a result, graduates can work in whatever field they want.

As a result, overseas students find German higher education even more appealing. Access to public universities, on the other hand, is limited.