Should you do TOEFL or IELTS for USA.  Don’t toss. Let us give you the facts

Do you know what TOEFL and IELTS mean.  NO???

So, Lets start with their introduction.

TOEFL: Test of English as a foreign language

Yes both are the English proficiency tests taken by students to get admission to Foreign Universities.

While IELTS is mostly a British test, jointly owned by the British Council, IDP, IELTS Australia and Cambridge English Language Assessment,  conducts its test in UK English,  it is widely accepted by over 9,000 organizations worldwide, including educational institutions, governments, immigration authorities employers and professional bodies.

The Test of English as a Foreign Language (TOEFL) conducts its test according to American English and for many years was the exam mostly all U.S. colleges and universities relied on 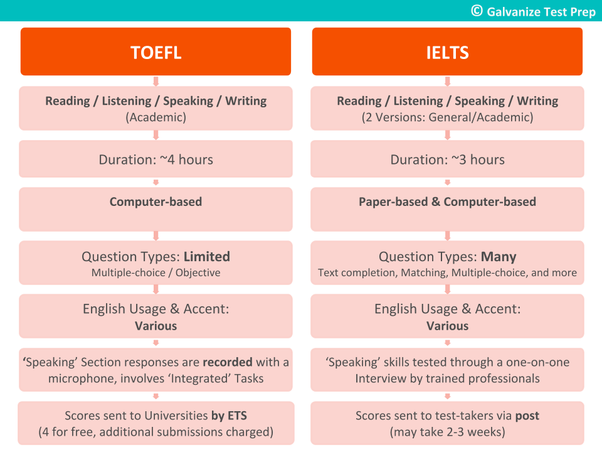 as a measure to test English language skills exhibited by applicants from non-English speaking countries.

If you go as per the facts, almost every American college accept TOEFL score which cannot be said for IELTS. However, IELTS is the test which has given a great competition to TOEFL for USA as apart from it’s largest acceptability to other countries, more than 3,000 U.S. institutions and programs accept now the IELTS as well in addition to TOEFL. You can see a list of these institutions and programs, the IELTS Recognition List, at http://ielts.org/.  IELTS has a wider spectrum whereas TOEFL is one of the oldest measures to test the ability of you English proficiency in USA since long time back. . Although most US universities (MIT, CalTech, UIUC, UofM) accept IELTS, Stanford does not.

The epic question TOEFL or IELTS??

Ultimately, the test whatever you take will be probably guided by the test that is accepted by the school in which you are applying. Both tests have their respective Web sites that very well can answer your questions and provide you up-to-date news on the progression of their Internet-based test expansions. Its your choice at the end of the day and the facts that you read.