Difference between TOEFL and IELTS

If you are going abroad and have chosen some countries  where English is primary language, it is must you need to give some basic language testing  exams which tests your English skills.  TOEFL and IELTS are two primary English testing exams which are required  to be  given  before you  apply to any  foreign Universities . But confusion is,what prevails in the minds of many students as they are confused to which is the  best option for their career.

Let us know the similarities between TOEFL and IELTS.. 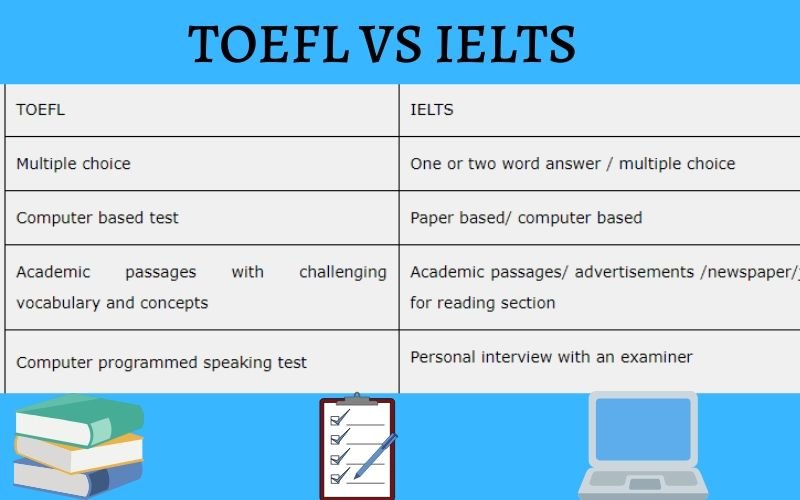 Both IELTS and TOEFL exams are English language tests aimed at Pre-university students planning to make a  step forward to higher education.

These exams are English language tests aimed at pre-university students planning to make the step to higher education.

Although both tests almost focus on the same thing,  but they do it somewhat differently… which is why so many students want to know which is better (and even more commonly, which is easier).

Below some of the points which distinguishes between TOEFL and IELTS exam on parameters like Acceptance,  Availability, Types, Cost, Scoring , Section etc…

TOEFL was initially developed at the Center for Applied Linguistics at Stanford University. As such, it has very wide acceptance in US universities. IELTS is mostly a British test. Hence, it is more readily accepted in Universities  within the commonwealth. This includes colleges in Britain,  New Zealand, Canada and Australia. Many American Universities also accept  IELTS.

AS  TOEFL is an older test than IELTS, and because more students apply to US  Universities  than Australia or UK, TOEFL boasts of a  higher number of test centers.  4,500 test centers spread across 165 countries.

IELTS, on the other hand, has only 900 centers globally.   But has a center in every major international city.

Both IELTS and TOEFL are offered 48 times in a  year.

TOEFL offers just one type of test – the TOEFL iBT (Internet-based Test). Some centers also offer the Paper-based Test (PBT) which is just a paper version of the iBT.

Testing fee for both TOEFL and IELTS varies between $150-$250 depending on your location and test type.

The TOEFL is scored out of 120 points. IELTS scores are based on a 9 point scale with half-point increments.

One of the major differences is the Speaking part of the test.

The IELTS speaking section is actually a one-on-one interview. Yes!!! You are required to give  this test having IELTS examiner face to face.

In TOEFL this test can be easily done by answering six questions into a microphone. These questions are then  sent to an examiner to mark.

A student  can be asked to listen to a lecture or an academic discussion and voice your thoughts on the same (such questions are called ‘integrated tasks’ on the TOEFL).

If you’re fine giving a test having an interviwer face to face then you can go for IELTS otherwise choosing TOEFL is better.

Be Ready to listen to various  accents on the IELTS Listening section which  includes , but isn’t limited to, British, American, Australian and Canadian accents.

Conclusion: But which one is Better????

Though IELTS is bit tougher than TOEFL,  IELTS still could be a better choice as most students feel that IELTS scores are more consistent than TOEFL..

Also for studying academic English IELTS probably could be a better choice..