A noun is a word that names something, such as a person, place, thing, or idea.
In a sentence, nouns can play the role of subject, direct object, indirect object, etc.

1.Common Noun:
A common noun is a noun that refers to people or things in general.
For example: boy, bridge, day, birth, happiness.

2.Proper Noun:
A proper noun is a name that identifies a particular person, place or thing.
For example: India, USA, tower, name of day – (Monday), name of month – (January) etc.

5.Abstract Noun:
An abstract noun refers to ideas, qualities and conditions – things that cannot be seen or touched and things which have no physical reality.
For example: truth, happiness, friendship etc.

6.Countable Noun:
Countable nouns have a singular and a plural form.
For example: Car-Cars, Friend – Friends

7.Uncountable Noun:
Uncountable noun can only be used in singular. They can’t be counted.
For example: money, water, bread, coffee etc.

Nouns can be used as a subject, a direct object, and an indirect object of a verb; as an object of a
preposition; and as an adverb or adjective in sentences. Nouns can also show possession.

Object of preposition: Roses are the flowers of love.

Possession: The lion’s cage is dangerous.

Underline the common nouns
Jyoti loves the beaches of the country.
I enjoy writing poetry.
The phone fell and broke.

Fill in the countable nouns
1. There are five in the street.
2. I bought three pieces of rice.
3. Margaret has six blue sandals.

Underline the countable nouns
1.I’m making a cup of coffee.
2.There’s some money on the table.
3.Do you have a packet of butter?

Underline the collective nouns
1.The band of musicians delivered a magical performance.
2.A bunch of grapes was hanging from the vine.
3.A flight of stairs leads to the terrace.

Underline the possessive nouns
1.The car’s front seat is torn.
2.The Joneses’ house is on the corner.
3.The soldiers’ guns were loaded.

➸ Sarah has always loved fashion. Sarah announced that Sarah wants to go to fashion school.
Instead, you can use the pronouns she and her to refer to Sarah.

➸ Sarah has always loved fashion. She announced that she wants to go to
fashion school. 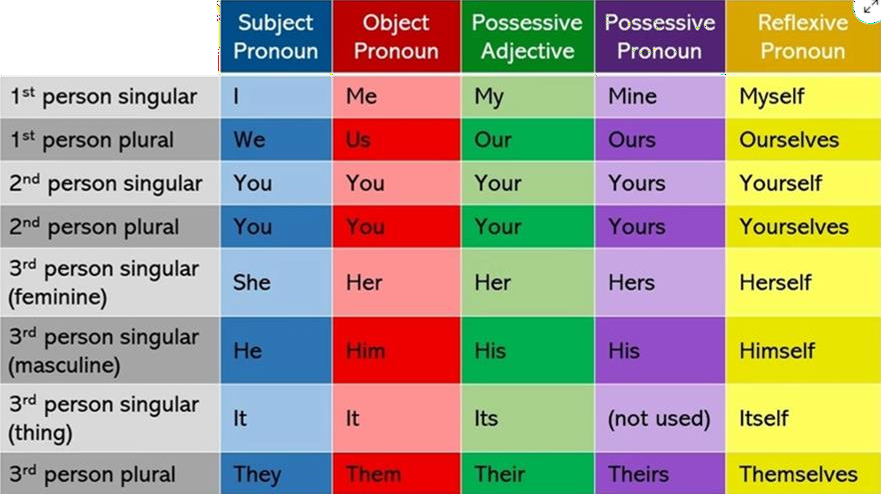 Rule 1 Subject Pronoun
Subject pronouns are used when the pronoun is the subject of the sentence. You can remember subject pronouns easily by filling in the blank subject space for a simple sentence.
Example:……..did the job.
I, he, she, we, they, who, whoever, etc., all qualify and are, therefore, subject
pronouns.

Rule 2 Object Pronouns me, him, her, us, them, themselves, herself.
Example: Jean saw him.
➸ “Him” is the direct object of the verb saw.

Rule 4
Pronouns that are singular (I, he, she, everyone, everybody, anyone, anybody, no one, nobody, someone, somebody, each, either, neither, etc.) require singular verbs. Each of the girls sings well.
Either of us is capable of doing the job.
Neither of them is available to speak right now.

Rule 5
The possessive pronouns yours, his, hers, its, ours, theirs, and whose never
need apostrophes. Avoid mistakes like her’s and your’s.
Examples: It’s been a cold morning.
The thermometer reached its highest reading.

Rule 6
Pronouns that end in -self or -selves are called reflexive pronouns. There are nine reflexive pronouns: myself, yourself, himself, herself, itself, oneself, ourselves, yourselves, and themselves.
Reflexive pronouns are used when both the subject and the object of a verb are the
same person or thing.
Example: Joe helped himself.

A pronoun should have a clear reference to a noun in a sentence.
Just like subjects and verbs, nouns and the pronouns that refer to them should agree in number.

Example:
•The importance of this study is that the study may allow researchers to understand the impact of the
Common Core on teaching.
➸ Rather than repeating “study” twice, it is possible to use a pronoun.

Revision:
The importance of this study is that it may allow researchers to understand the impact of the Common Core on teaching.
➸ Because “study” is singular, use a singular pronoun (“it”) to replace it.
Example:
• When participants arrived for their interview, participants needed help finding the correct location.

Revision:
When participants arrived for their interview, they needed help finding the correct location.
➸ Because “participants” is plural, use a plural pronoun to replace it.

1. The supervisor and the employees disagreed about the number of times should
meet each month.
2.Lata didn’t come to school because—- was sick.
3.Kartik felt nervous when Mala asked—- to dance.
4.The little fish knew—–was doomed when the shark came around the corner.
5.The woman arrived at the store, but—–had forgotten her wallet and had to go back home.
6.The blind man was about to walk into the street, but I ran over and helped—- .
7.New doctors must pass —— certification exams before getting licenses.
8.Some of the marbles fell out of——-bag.

Remember: They is the best gender neutral pronoun.
Example:
Everyone on the airplane sat in their assigned seat.

Collective nouns are treated as singular nouns. So, they should always replaced by a
singular pronoun.

Example:
A group of teachers met to see if it could find a way to help students improve their IELTS scores.

Because the subject is singular (“a group”), the pronoun (“it”) must also be singular.

Demonstrative Pronouns
Demonstrative pronouns indicate a specific subject. When using demonstrative
pronouns, you could imagine yourself pointing at the object.
That and this are singular, referring to a single subject, while these and those are
plural.

Menu
Enroll For Weekend-Batches
[contact-form-7 id=”16970″ title=”enroll now”]
This website uses cookies to improve your experience. If you continue to use this site, you agree with it.
Ok